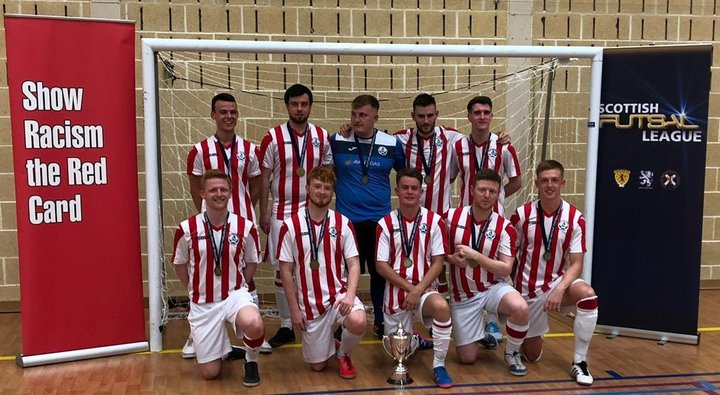 In partnership with Show Racism The Red Card

On a night where history was guaranteed to be made a record crowd of 200 filled the Perth College to witness it unfold. Before the final got underway the annual Select game took place between the North & South. Last years match was settled by a penalty shoot out but this year the South won a thrilling match 5-3 to have the bragging rights.

In what was a repeat of last seasons final and TMT making their 3rd appearance in a row in the final the game started nervously with both teams but first half goals from Steven Laurie and Brad Steedman had Saltires in control before Graham Finlay grabbed one back before the break.

After half-time, Kyle Ballingall made it 3-1 before Steven Finlay cut the lead once more. With seconds remaining, however, Scott Smith sealed the trophy for his side.

In doing so PYF Saltires made history as the first team to retain the Scottish Cup and also the first side to win the League & Cup double.

Everyone at SFL would like to give its congratulations to all involved at PYF Saltires and again our commiserations to TMT, we hope to see you back next year.

We would also like to thank SRTRC for being this year’s final partner. Special thanks to Pivotal Sport for their media coverage of the semi final and final, for more on the final please visit their site https://www.pivotalsport.co.uk/2019/05/futsal-pyf-saltires-clinch-historic-double/